As your designs become more complex it is important to divide your design in several blocks that are manageable by themselves. These blocks are then reused at several points in the design. Introducing hierarchy in your design allows you to do create manageable blocks without duplicating code. This is important as this makes components more robust, less prone to errors, easier to document and easier to modify. We strongly recommend that you use hierarchy in your designs. It may look like overhead in the beginning, but it pays off later when you increase the complexity of your designs.

Within IPKISS PCells, it is possible to reuse cells hierarchically through ChildCells. Each ChildCell has views that have to be instantiated as instances (once or several times) in the views of the parent PCell. To use a ChildCell in a Parent Cell you need to go through the following steps:

In the figure below, these steps are illustrated in pseudo-code for a Parent Cell that uses 2 ChildCells. The first ChildCell (child_1) is instantiated twice in every view, whereas the second ChildCell(child_2) is instantiated once. 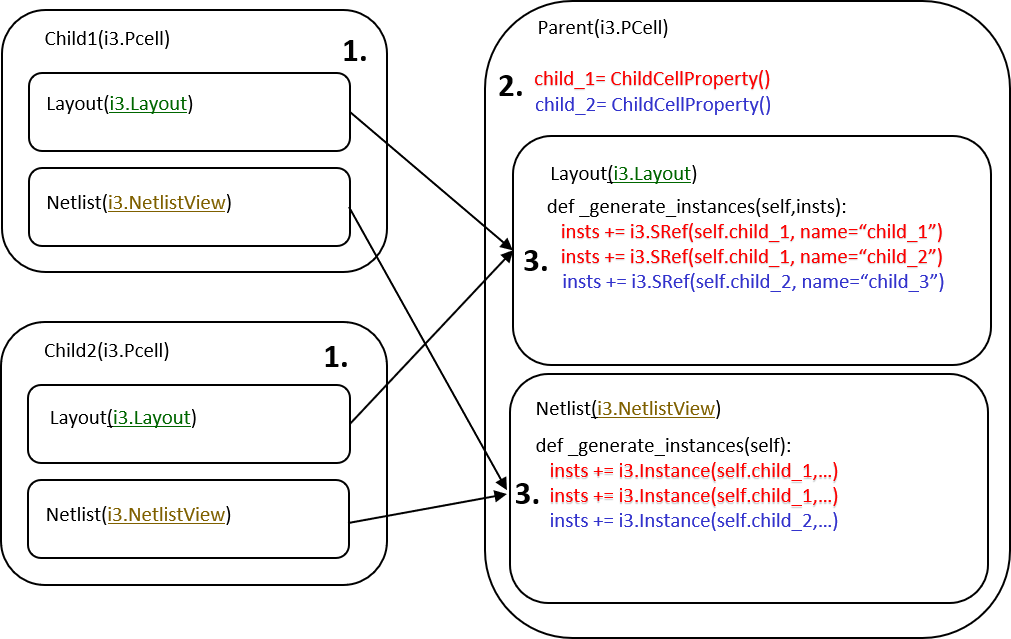 This is best exemplified by the following piece of code:

Corresponding views are from the same view type, which means that they inherit from one of the base view types as represented in the table below.

When a cell has two views that are from the same base view type, ChildCellProperty will pick the one that is set as the default_view of that type. You can read more on default view types in the pcell guide. See also the example below: Overriding views originating from ChildCellProperty.

In the Layout view for example, this can be done through SRef, where a name and a transformation have to be defined.

For other views this is very similar: in the table above, a listing of the Base View Type and the corresponding functions to use inside _generate_instances is given.

It may be that the default_view that is automatically set by ChildCellProperty in each view of the Parent cell is not be the one you want. In that case you can always override it using _default_ methods that can override the default value of any property. Let’s illustrate this with a code excerpt.

In the code excerpt we have overridden the default layout view of self.child. It now refers to the LayoutBlackBox view.

If the child cells are automatically calculated by a _default method in the parent cell, as with the ParentPCell.Layout above, you should not modify properties on the child cell using the pattern below, since it may lead to undefined behaviour:

The reason is that in this case, the parent cell is responsible of calculating its child cells. Since you are not the owner of that child cell, it is difficult to predict what would happen since the parent cell might have defined interdependencies.

If on the other hand you created the child cell yourself, it is possible to modify parameters:

It is important to set the default view of the child to the LayoutBlackBox, otherwise it will still use the default Layout view!