Starting from IPKISS 3.9, IPKISS is available for Python 3.

Python 3 is the most recent version of Python. The Python community decided to stop supporting Python 2 in 2020, which means no improvements are added to Python 2 anymore. In addition, the Python ecosystem is now centered around Python 3.

To keep improving IPKISS, we have migrated IPKISS 3.9 to Python 3. This way we can benefit from the latest functionality, stability, safety and performance improvements that the Python ecosystem has to offer. Migration to Python 3 involves making certain changes to your code that are easy to perform by following the guidelines in this document.

To make the transition to Python 3 as smooth as possible, this release does not contain changes to IPKISS’s API. This means that changes you have to make in your code relate to differences between Python 2 and Python 3, and potentially to backward incompatibilities in IPKISS. As usual, we treat backward compatibility very seriously, and only introduce incompatibilities when they fix bugs or with the goal to make improvents to the product that are hard to make without the backward incompatibility. In addition, the Python 2 and Python 3 version of IPKISS 3.9 have exactly the same codebase.

As an IPKISS user, you can follow the instructions below to migrate your existing code to Python 3:

This image shows the five steps for migrating to IPKISS 3.9 py3. They are explained in more detail below.¶

Updating your code for IPKISS 3.9 py3¶

There are two things to keep in mind when updating your code:

Since converting code from Python 2 to Python 3 means making small changes over many places, we recommend that you use a version control system. For this you can check out our tutorial on version control.

The main differences between Python 2 and Python 3 are discussed below.

In Python 2, print is treated as a statement instead of a function. If you want to print out “Hello, world!” you can do so with the following print statement:

With Python 3, print() is now explicitly a function, so to print out the same string above, you can do so simply and easily using the syntax of a function:

Conveniently, the print() syntax is also backward compatible with Python 2.7, so your Python 3 print() functions can run in either version.

In Python 3, integer division became more intuitive, as in:

This modification in Python 3 made dividing by integers much more intuitive and is a feature that is not backwards compatible with Python 2.7.

Python’s round() function behaves differently on Python 2 and Python 3. Make sure to check your code that uses round() carefully.

If you don’t want to adapt the behavior to Python 3 and would like to stick with Python 2 rounding behavior, you could use the following function:

The functions math.ceil() and math.floor() return an integer in Python 3 while they returned a floating point number in Python 2. You may need to adapt your code if it relies on the result being a floating-point number.

Imports relative to a package¶

and you want to import submodule2 in submodule1.py.

In Python 2, you can just import the submodule directly, via an implicit relative import:

In Python 3, this is no longer the case. You have to be more explicit:

The way to write compatible code depends on what you need:

Iterating over a dictionary yields its keys, so there is rarely a need to use dict.keys() or dict.iterkeys().

The __future__ module in Python¶

We can use the Python 3 print statement in the Python 2 function using the future module.

We can use Python 3 division in Python 2:

In Python 2 we can not use Unicode but future modules allow us to use Unicode.

Python 2 uses the ASCII character set by default, so when you type "Hello, Sammy!" Python 2 will handle the string as ASCII. Limited to a couple of hundred characters at best in various extended forms, ASCII is not a very flexible method for encoding characters, especially non-English ones. Python 3 uses Unicode by default, which is a more versatile and robust character encoding. This means that you can easily type and display many more characters directly into your program.

In most situations, there’s no change required from your side. It is, however, important to be aware that, in Python 2, a string is of type ‘bytes’ whereas, in Python 3, a string uses Unicode by default. If you are using Unicode characters and would like your Python 3 code to be backward compatible with Python 2, you can add a u before your string.

We’ve discussed the main differences between the two Python versions. However, there are more things to consider. Here are some useful links:

It is possible to translate your Python 2 code into Python 3 code with the help of 2to3.

2to3 is a Python program that reads Python 2.x source code and applies a series of fixers to transform it into valid Python 3.x code. The standard library contains a rich set of fixers that will handle almost all code. The 2to3 supporting library lib2to3 is, however, a flexible and generic library, so it is possible to write your own fixers for 2to3. lib2to3 could also be adapted to custom applications in which Python code needs to be edited automatically.

More information on how to use 2to3 can be found here: 2to3 documentation.

Below is a practical example of using 2to3 in PyCharm. First, open the Terminal in PyCharm and run 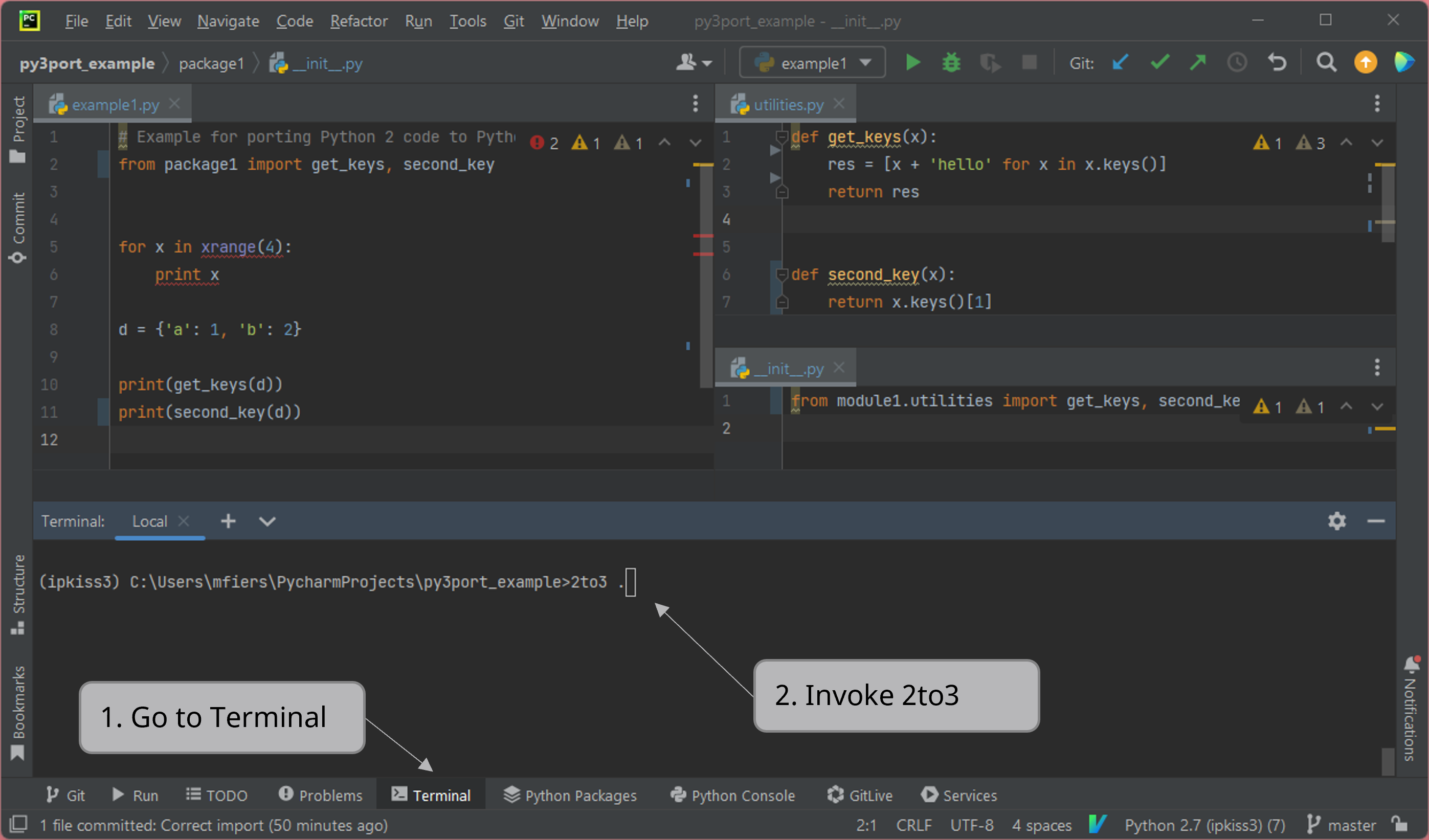 We start with running 2to3 . in the terminal of PyCharm.¶

This will print all changes that can be performed to make your code Python 3 compatible. Below, we do one modification based on the suggestions made by 2to3: 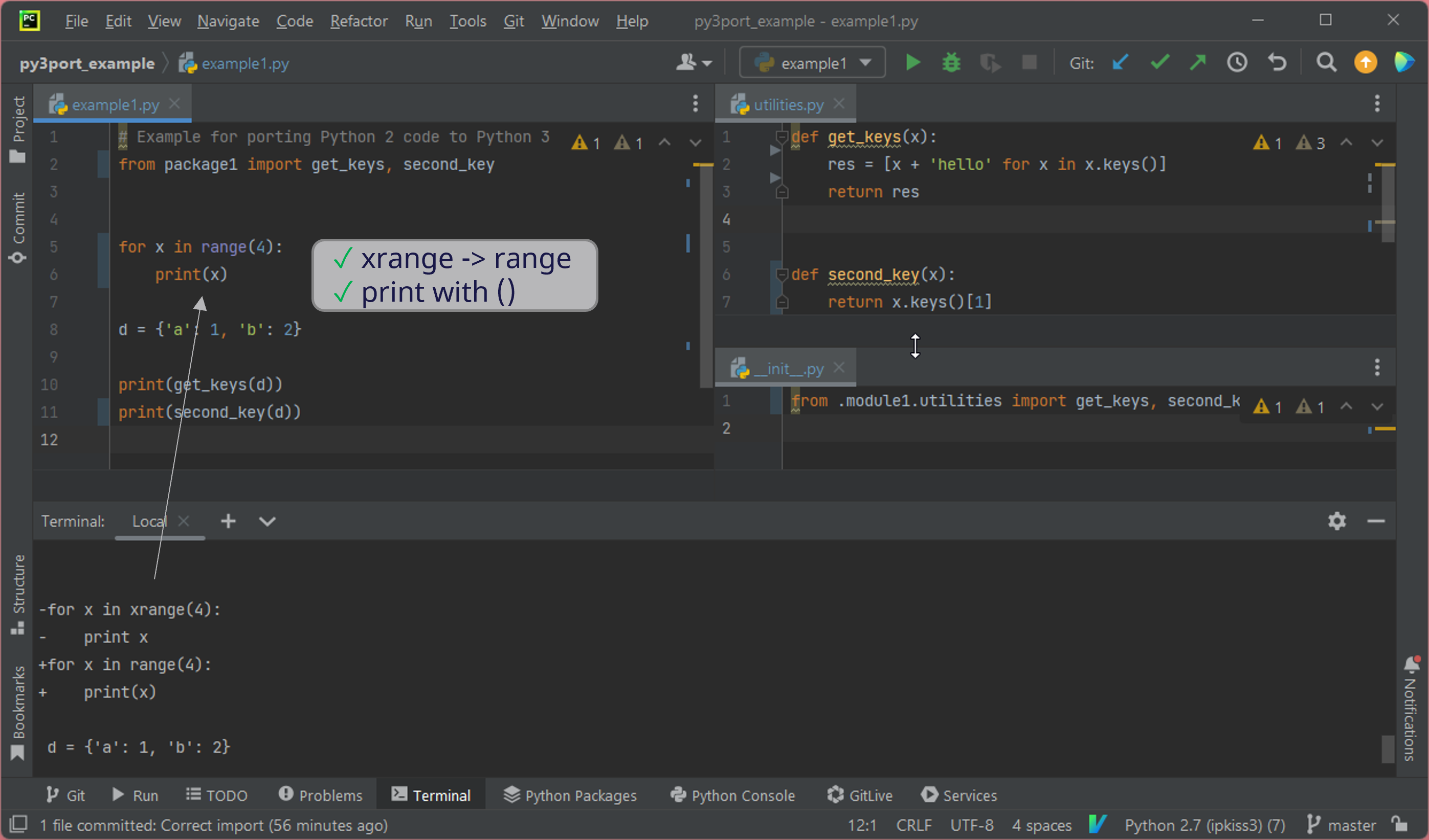 In this example we change the relative import by adding a . in the import.¶

After making everything Python 3 compatible, our code looks like this: 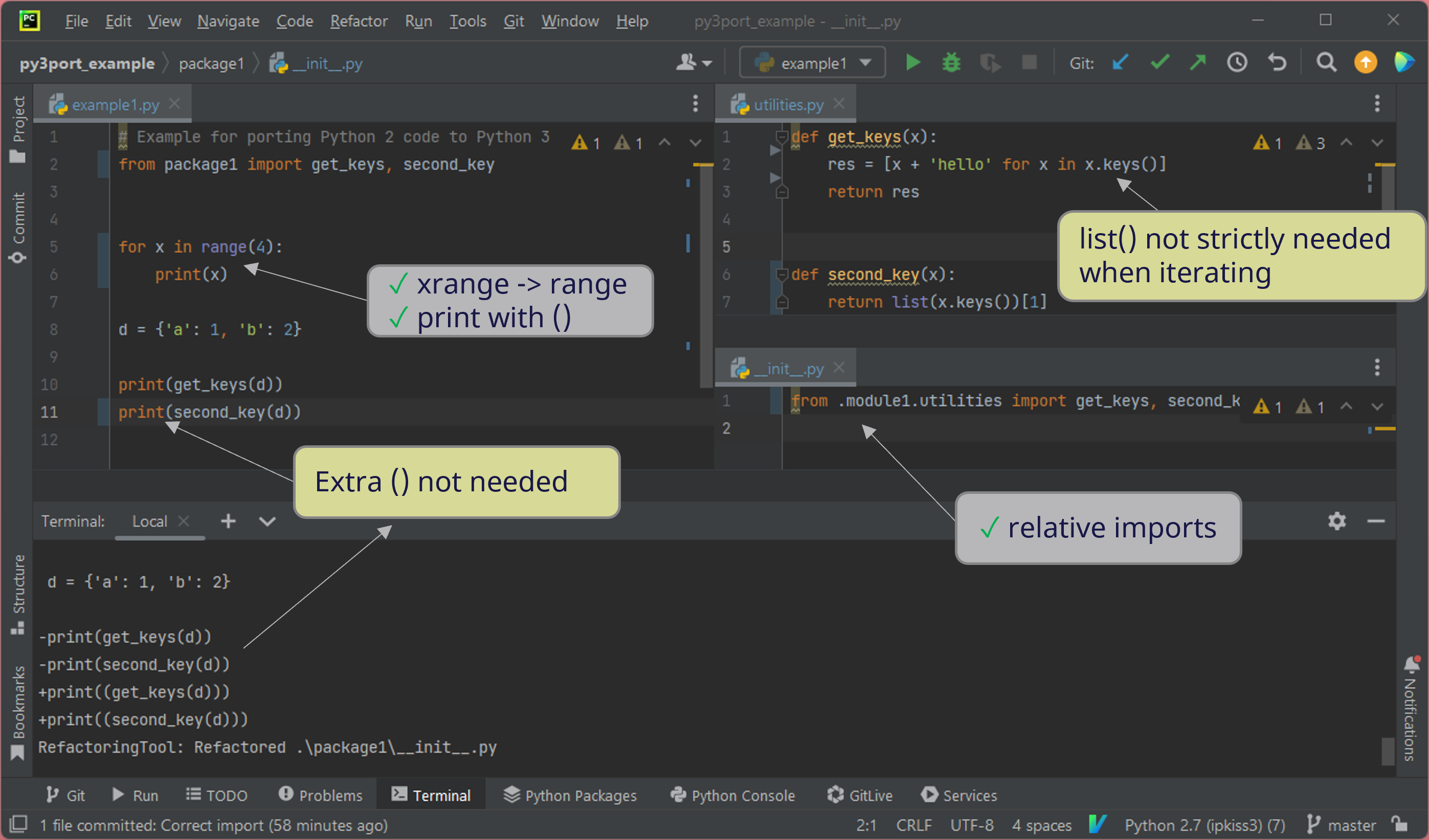 After 2to3 is run, the code will be updated and made Python 3 compatible.¶

It is important to note that 2to3 might give undesired suggestions. In the example above, we did not change the second print statement and the extra list() conversion.

If you want to make sure that new code written in Python 3 is still compatible with Python 2 code (and, hence, with IPKISS <= 3.8), PyCharm has some assistance tools for this.

First go to the settings and make the following modification in the “Inspections” tab: 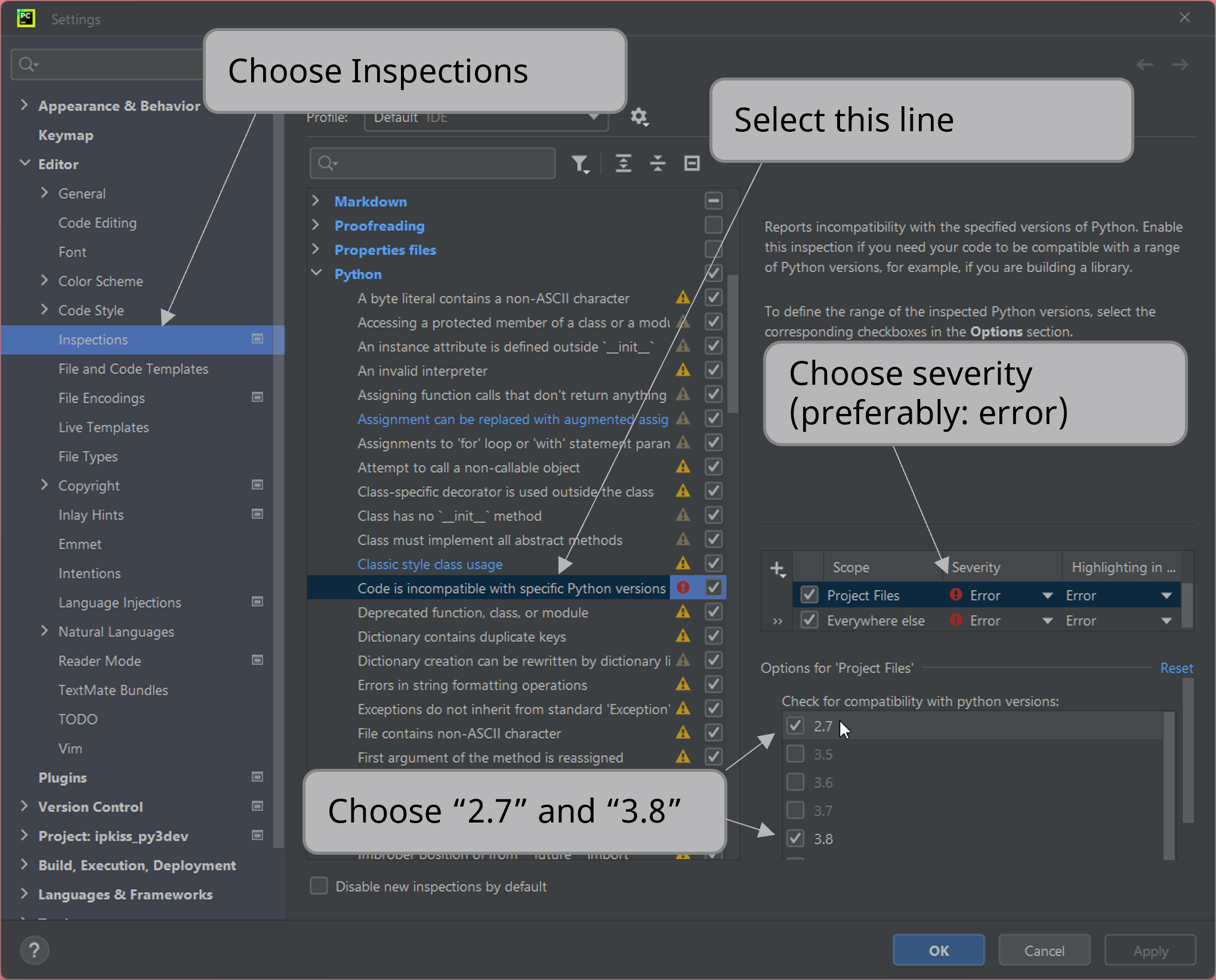 In the PyCharm settings, choose the “Code is incompatible with specific Python versions” inspection option. Code should be compatible with Python 2.7 and Python 3.8.¶

Afterwards, errors will be visualized in the code editor, for example:

PyCharm will now show errors when code is not compatible with Python 2 or Python 3.¶

If there are no errors shown by the editor, it means that your code will work in both Python 2 and Python 3.

Migration to Python 3 involves making certain changes to your code that are easy to perform by following the guidelines in this document. If you encounter any difficulties while converting your code from Python 2 to Python 3, do not hesitate to reach out to our support team and we’ll be glad to help!

We also recommend that you migrate to Python 3 at your earliest convenience. Python 2 is not supported anymore by the Python community, and future releases of IPKISS will be released for Python 3 only.